Welcome to Boy Meets Wiki, the only Boy Meets World online encyclopedia. We are currently working on 687 articles. You can check out the new pages and stats here. Want to help us out? You can expand these articles, and create these. If you have any questions visit User talk:TheDareGuy. This wiki was created on October 22nd, 2006.

Boy Meets World is a 90's sitcom about a boy, Cory Matthews, and his journey to adulthood. With him are his best friend Shawn Hunter, his girlfriend Topanga Lawrence, his charming yet silly older brother Eric, and his teacher and next-door-neighbor George Feeny.

Girl Meets World is a spinoff series about Riley Matthews, the daughter of Cory and Topanga, finding her own way in the world along with her best friend, Maya Fox. 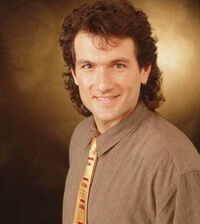 Jonathan Turner was Cory, Shawn, and Topanga's teacher at John Adams High. His authority was sometimes undermined of by George Feeny, due to the fact that he had new and fresh ways of dealing with students, as opposed to the conservative ways other teachers have used. His apperance also suggested that he was a young man, which was strenghtened by the fact that Cory has mistaken him as Harley on his first day of high school. Turner's teaching methods were often questioned, but they have always brought desired results and taught the chaacters many valuable lessons. In one episode, we learn that Jonathan's parents were rich, but he decided to run away in order to fulflfill his dreams of becoming a teacher. Read More